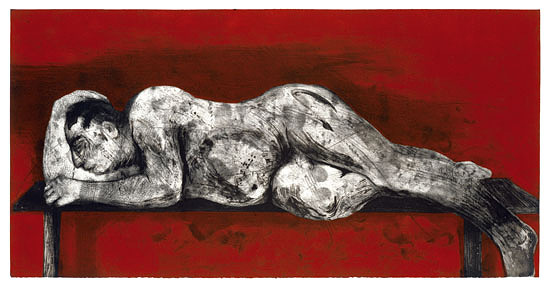 “The print marked Act IV, Scene I from the Ubu suite provides the compositional motif that Kentridge expounds upon in the large Sleepers, a series of 4 prints published in 1997. The artist, Ubu, lies naked on a table suggestive of hospital beds, mortuary slabs, dissecting tables or torture chambers. There is nothing sexual or voyeuristic about this portrayal of the male nude (the artist again) who exists rather as an asexual figure of suffering and resignation, an interesting counterpoint to the tradition of the reclining female nude in western art. South Africa gained its independence under Mandela in 1994, and the Truth and Reconciliation Commission began its arduous process of confession and healing. Kentridge was working on large-scale charcoal drawings of Ubu at this time and in order to bring a sense of the body abused, damaged and humiliated into the drawings (in accordance with the histories revealing themselves on the radio every morning in the TRC broadcasts), he rode over the paper on a bicycle, flagellated the paper with a charcoal-impregnated silk rope and invited, “children and cats” to trample upon and desecrate the image. To carry these marks onto a plate through printmaking, Kentridge used a range of materials and objects and pressed them into a soft ground painted onto the giant Sleeper plates, leaving footprints, scrapes and scratches. The first Sleeper plate, Sleeper 1, shows the artist’s initial etching, aquatint and drypoint marks. Sleeper Red and Sleeper Black drop aquatint screens around the figure, while Sleeper and Ubu reintroduces the spiral and foot of Jarry’s suspended schematic phantom through a pronounced plastic Dremel line, produced by using power tools to engrave into a sheet of polycarbon.”