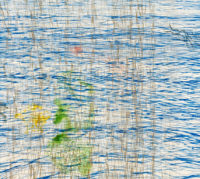 Richard Penn started working at DKW in 2010 on a series of monotypes. Using nature magazines and images captured by the Hubble Telescope as his references, he immersed himself in exploring the simultaneity of macroscopic and microscopic scale in his artworks. Looking at the of scale and distance on a single sheet of paper, Penn illustrated how within a single dot the representation of an atom could, in that simultaneous instant, also be a scaled section of the galaxy.

Penn states, “We have easy access to images of deep space taken by numerous telescopes and cameras which depict objects spanning hundreds, thousands even millions of light years across and millions and even billions of light years distant.” Taking into consideration, the fact that the raw data is always received in black and white, Penn uses a real visual representation of the universe through the telescope. A huge distance is covered although it is only focused on a tiny piece of the sky.

Penn has often worked with the notion of ‘origins’ in his work. He says, “Initially I worked with photographic imagery in which I examined certain gestures of my father which threw me back to my childhood and brought to the surface intimations and images of my grandfather.” This interest in the origin of life naturally panned outwards and extended to origins of the universe. At first he says, “I was trying to articulate an inherited gesture.” The imagery began with photographs of the artist’s father. He started zooming in to the photograph closer each time until the figure became an abstract blur. This he associated with the cosmos.

In the same way, the minute dots forming the soft grey areas of his monotypes capture the images of deep space and simultaneously become reminiscent of static seen on television in its quality. This static is said to be a result of radiation that is still travelling through space after the birth of the universe, also known as the Big Bang. The artist investigates our limited understanding of reality in terms of scale and distance.

Penn is a self-taught animator with a Masters Degree in Fine Art, with distinction, from the University of the Witwatersrand in Johannesburg. In 1997 he was awarded 3rd place in the PPC Young Concrete Sculptor Award. After completing his honours degree in 1998, majoring in painting with distinction he developed and taught an animation course for 1st, 2nd and 3rd years in the Fine Arts Department at Wits University.

In 2004 he was awarded the overall winners prize in The Sasol New Signatures Art Competition. In 2002 he accepted the position of Head of Animation at AFDA Johannesburg (The South African School for Motion Picture Medium and Live Performance) and maintained that position until 2009. In 2010 he started STRANGE Blue duck, an animation training company which teaches stop frame animation to children from 9 years and up and facilitates corporate animation team-building and creative enrichment workshops.