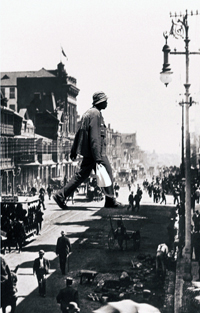 The creation of Jo’burg Man formed part of the exhibition ‘One‘ which was shown at the Association for Visual Arts in Cape Town in 2000. Jo’burg Man was selected as one of twenty artworks featured in the Johannesburg Art City Project and was reproduced to billboard size for display on the side of a building in downtown Johannesburg (Main Street / cnr Simmonds). The work also forms part of many private and corporate art collections in South Africa, Europe and the United States. In the context of South Africa’s recent history – Jo’burg Man celebrates the victory over injustices of the countries past. Jo’burg Man is available at David Krut Projects.

Yudelman began photographing at a young age under the tutelage of his father and was barely out of his teens in 1979 when he landed a job as staff photographer at South Africa’s largest daily newspaper, The Star. This was a time of intense social and political turmoil and Yudelman worked simultaneously on press photography for The Star and his own personal body of work “Suburbs in Paradise,” Taken in and around the suburbs of Johannesburg between 1979 and 1985. In 1986 Yudelman left South Africa, working as a freelance photographer first in London and later in Los Angeles. He returned to the newly democratic South Africa in 1996 and currently lives in Cape Town. (www.daleyudelman.com)

For the past five years he has been working collaboratively with painter Arlene Amaler-Raviv, creating multi-media images addressing a wide range of social issues – their most recent work ‘Live Stock’ was exhibited at the 8th Havana Biennale, Cuba and Henie Onstad Kunstsenter, Oslo, Norway. Amaler-Raviv was born in Johannesburg. She received a BA FineArt Degree from the University of the Witwatersrand where she studied under Robert Hodgins. In 1997 Amaler-Raviv moved to Cape Town where numerous projects developed, including two collaborative exhibitions with photographer Dale Yudelman. (www.almer-raviv.com)