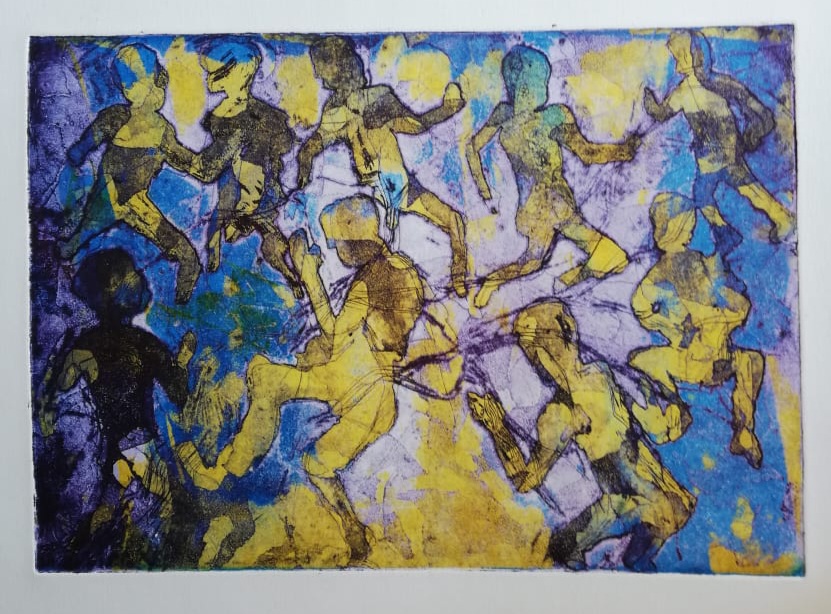 Mimi van der Merwe grew up in Malmesbury, near Cape Town. She studied literature at the University of Stellenbosch and did a three year diploma in Fine Art at the Stellenbosch Technical College at the same time, under Edith ten Kate.

In 1960 she went to Brussels where she studied painting and etching at the Academy Royale. In 1961 and 1962 she specialised in etching at the Ecole des Beaux Arts in Paris, under Professor Jean E. Bersier. In 1961-62 she obtained a bursary from the French government, and at the end of her studies she obtained the Prix de l`Atelier.

From January to March 1997 she spent three months in Paris at the Cite Internasionale des Arts and worked at the Atelier Contrpoint and the Atelier Francais Bricaut.

Mimi has taken part in many exhibitions overseas. She has been invited artist to national exhibitions such as the Durban Exhibition in 1981, the Sand du Plessis exhibition in Bloemfontein, the Women`s Exhibition at the SA National gallery in Cape Town in the 1960`s.

In France in 1997 she had the opening at Arte et Empreintes gallery in Paris and in October 1997 she had an exhibition at Gallery III in Harstad, Norway (with Lucas Bambo).

Mimi`s studio in Pretoria was established in 1983. She teaches printmaking, drawing and painting. It is frequented by people who are keen to learn new disciplines in art – working people, students, and established artists. Some students have established their own studios. Exhibitions have been held regularly, for instance at the Alliance Francaise de Pretoria, Pierneef Museum. Cafe Palette at the Pretoria Art Museum, Centurion Art Gallery and at Tait Gallery (the name of the studio which is in Tait Street, Pretoria).

Work by this artist has appeared in various publications, for instance Contrast, the literary magazine, Die Suid-Afrikaan, South African Graphic Arts and Techniques by F.L. Alexander. Reference: The Dictionary of South African Painters and Sculptors by G.Ogilvie.

She has also written a handbook on different printmaking techniques.

She is a member of Soroptimist International Pretoria, a service club with amongst other activities, a strong interest in the Winterveld.

As an artist, Mimi is interested in human beings: How the body and especially the face reflects mental and spiritual attitudes, how people interact with each other and the environment. She enjoys the brightness of colour and what shapes and textures can express.