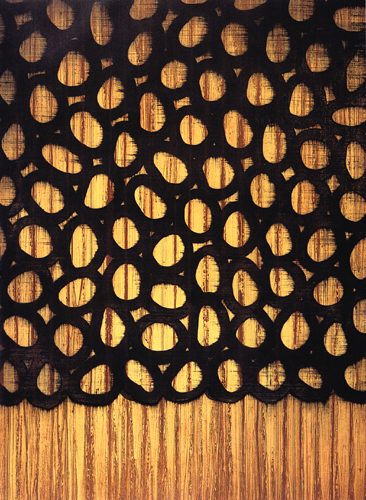 Mark Francis first became known in the early 90s for his seductive paintings of magnified cells and microbes. Since then he has exhibited widely both in the UK and abroad, playing a part in the recent boom in British art. While he has always remained slightly distanced from the brasher core of young British artists, he has nevertheless been a regular participant in landmark British painting exhibitions over the last decade.

He makes paintings that are based on scientific images of microbiology – such as bacteria and cells – and produces the final works with a perfectly smooth wet-on-wet style. His paintings are usually monochromatic descriptions of cellular clusters, scattered within the parameters of large-scale canvases. The individual cells are softly painted and seem to float just beneath the picture plane. This softness removes the stronger clinical connotations, allowing the paintings to become highly tactile objects as well as powerful abstract images. The paintings draw out the consequent ambiguity of enlarging such a tiny area of space, to the point where the scale makes the pictorial elements artificial and dominating. The absence of logical pattern within Francis’ paintings implies a sense of the infinite: as if the imagery continues indefinitely beyond the limits of the canvas. This echoes a scientific approach – taking a single element out from the rest of the world and focusing on it to exclusion. Such an interest in science has led Francis to combine two contradictory elements: the coldness of scientific investigation and the seductive qualities of photo realist painting. The painted surface is invariably immaculate, reminiscent of German conceptual painter Gerhard Richter’s precise copies of photographs. But while earlier statements by photo realists were aimed at a perfection of technique (using painterly blurs to mimic a particular photographic effect, such as soft focus), Francis uses his own blurring to add three-dimensional structure and movement to the images.

Francis’ paintings blend the intuitive repetition used in process painting, the historical concern of abstraction and the painterly luminosity of Photo Realism. Although the scale of Francis’ canvases has meant that their central subject has become essentially abstract, they always retain a connection to their photographic sources. However, in his more recent work he has introduced a shift. These new paintings are formally more complex, with the trademark cells hovering over an expressive, coloured ground. The canvases explore how the cells, which are loosely looped together, become further altered when placed against a conflicting background. Here the scientific origin takes a back seat, with the dripping paint firmly locating the works at human-scale rather than the more familiar micro-scale of the earlier works. The relationship subtly complicates the issues by contrasting the molecular imagery with the fluid, organic dripped paint. Yet the scientific origins are far from forgotten; in his solo show at the major new British gallery, the Milton Keynes Gallery, in early 2000, Francis displayed fragments of scientific imagery that he had collected as source material over the years. The exhibition revealed the deep complexity of Francis’ practice, the historical roots his work has grown from, and the subtle shift in direction he was taking. Altogether, the show was a tour de force that cemented the artist’s reputation as one of Britain’s most engaging painters.

Francis exhibited at David Krut Resources in 2006 and was represented in the 2008 Joburg Art Fair by David Krut Projects. He continues to exhibit internationally, with recent group and solo shows in Germany, the United Kingdom, Italy, Finland, Spain, Istanbul and Austria.