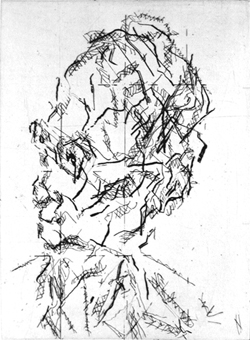 Frank Auerbach was born in Germany, however, in 1939 his parents sent him to England to escape the Nazis as part of the Kindertransport Programme. Even at a young age, his artistic ability was evident. He went on to study at St Martin’s School of Art in London from 1948 to 1952. After that he studied at the Royal College of Art in London from 1952 to 1955. He is an internationally acclaimed painter and currently lives and works in London.

Auerbach’s work is focused mainly on scenes in and around his home in London and landscapes of Camden Town. His portraits usually feature friends and people close to him, such as his wife, Julia and the professional model, Juliet Yardley Mills (usually referred to as J. Y. M. in titles). William Feaver is a writer and critic and has also published a monograph on Frank Auerbach in 2009.

His paintings of the 1950’s and 1960’s are characterised by heavy impasto and earth colours, giving way more recently to vivid colours to depict subject and place. The power and creative tension in his drawings is equally apparent in his rare, but carefully considered etchings.